THE ISLAMIC CENTRE OF ENGLAND

A Place for Worship and Guidance

HomeUncategorizedHolding the 94th session of Weekly Webinar on Quranic Lifestyle- By HIWM...

Holding the 94th week of weekly webinar on Quranic Lifestyle

In an era where so many of people are working or studying from home and have more flexible timetables, Islamic Centre of England is holding few live interactive discussions with different speakers and topics such as weekly webinar on Quranic Lifestyle.

The weekly webinar on Quranic Lifestyle is held live every Thursday at 5:30 p.m. on virtual networks such as Zoom, YouTube and Facebook.

The 94th session of this webinar, which was held on Thursday, 27th January 2022, has dedicated its topic to the following subject:

In this meeting, which was addressed by HIWM Shaykh Ali Alami, he delivered his speech for approximately 35 minutes on the subject of the meeting.

Shaykh Ali Alami has learned his advanced stage in khārij level under tutelage of Grand Ayatollah Golpayegani who was the leading figure in Qom seminary.

He studied the third volume of Molla Sadra Shirazi’s Al-Asfār al-Arbaʿah, which is the foundation of transcendental philosophy, under Ayatollah Morteza Mutahhari.

Shaykh Alami started by teaching the elementary courses and gradually expanded his teaching to intermediate and advance level courses in literature, logic, philosophy and jurisprudence in seminary and universities.

in Ramadan of 1985 Grand Ayatollah Golpayegani instructed, and Grand Ayatollah Imam Ruhollah Khomeini approved, that Shaykh Alami would move to London to be at the helm of Islam Universal Association of London (Majmaʿ-e Eslami Jahani).

Shaykh Alami has been active in London area for the past three decades in Islamic Universal Association of London.

The sermons delivered by Shaykh Alami have been well researched. Therefore, they have been organised, edited and compiled in the form a number of books.

At the second part of the meeting in the Q&A section, the meeting’s moderator, Mr Seyed Mahdi Abedi asked the questions raised by the participants in the meeting and the speaker answered them. 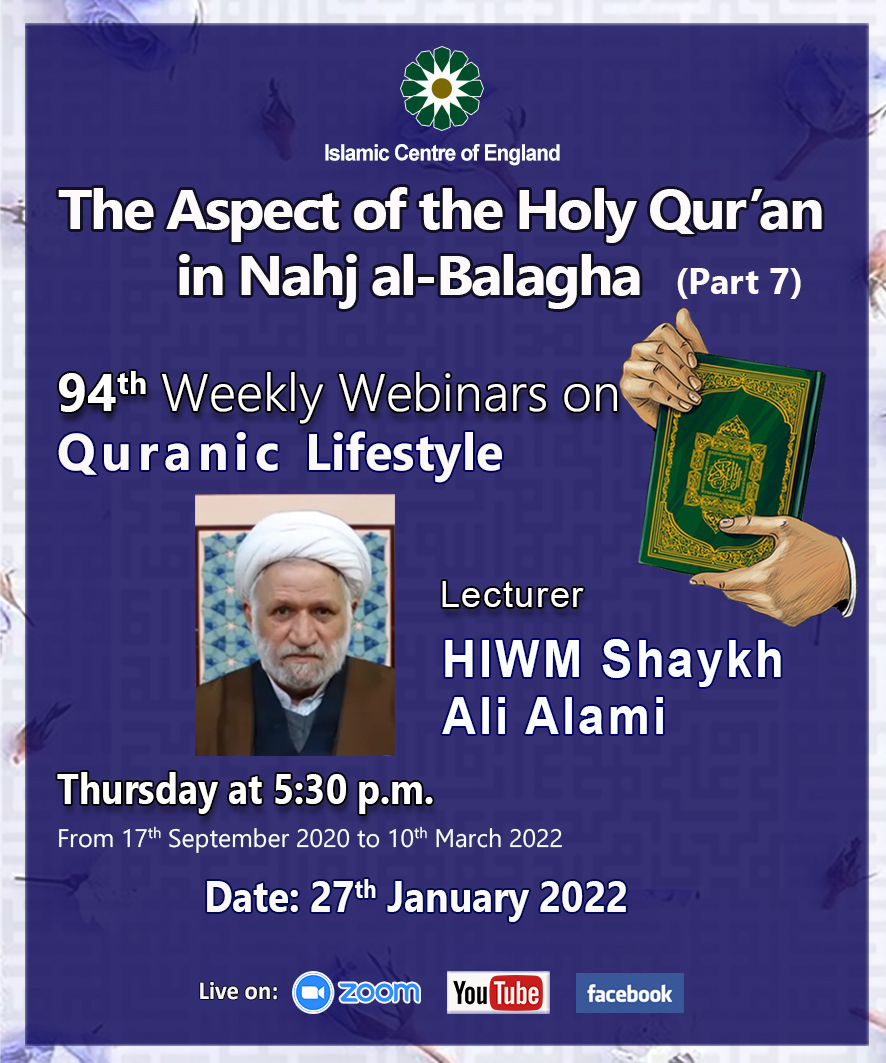 Topic: “The Aspect of the Holy Qur’an in Nahj al-Balagha-Part 7 “

This website uses cookies to improve your experience while you navigate through the website. Out of these, the cookies that are categorized as necessary are stored on your browser as they are essential for the working of basic functionalities of the website. We also use third-party cookies that help us analyze and understand how you use this website. These cookies will be stored in your browser only with your consent. You also have the option to opt-out of these cookies. But opting out of some of these cookies may affect your browsing experience.
Necessary Always Enabled
Necessary cookies are absolutely essential for the website to function properly. These cookies ensure basic functionalities and security features of the website, anonymously.
Functional
Functional cookies help to perform certain functionalities like sharing the content of the website on social media platforms, collect feedbacks, and other third-party features.
Performance
Performance cookies are used to understand and analyze the key performance indexes of the website which helps in delivering a better user experience for the visitors.
Analytics
Analytical cookies are used to understand how visitors interact with the website. These cookies help provide information on metrics the number of visitors, bounce rate, traffic source, etc.
Advertisement
Advertisement cookies are used to provide visitors with relevant ads and marketing campaigns. These cookies track visitors across websites and collect information to provide customized ads.
Others
Other uncategorized cookies are those that are being analyzed and have not been classified into a category as yet.
SAVE & ACCEPT